Jackson - -  I will catch up with later.
For now, if you have ever stood in front of one his paintings, in the flesh, then you will have experienced some of the power they have, the ability they have to jumpstart you suddenly AWAKE and you will know why he rose to the top of the shit heap of the New York City 'art game' of the 1950s.
And, if you were astute enough, you would finally have understood (as I did, when I stood in
front of a small Pollock painting, not much larger than the Mona Lisa, in 1967) . . . finally understood
what core component The Mona Lisa shares in common with a Pollock painting from the 1950s . . . (and for that matter with Jack Kerouac too).
I will go into that another time. In the meantime there is a 'comment' mechanism at the bottom of this posting
perhaps someone out there can say what that core element of great paintings might be. 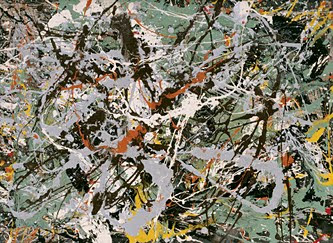 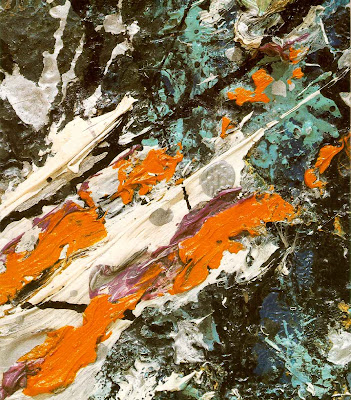 Apart from Blue Poles allegedly having Kerouac's blood on it (he evidently cut his foot on a broken syringe and walked across it, pissed one night) the feeling of unfinished business is in Pollock's work and the Mona Lisa is also unfinished - she's got no eyebrows or lashes - Leonardo never got around to it!?