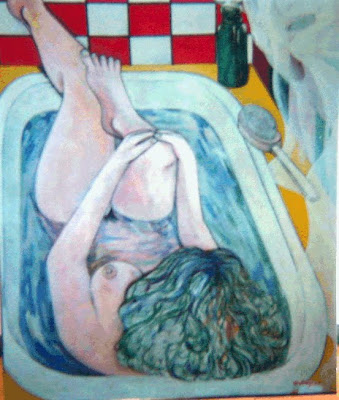 Nancy, 1979 - a painting on canvas by Karl Gallagher

To be sure, without significant help along the way I would never have made it through. By the time I was twelve I was consumed by fear and a sense of powerlessness. I was in serious trouble with schooling, struggling in every subject except art and English expression. Anything to do with maths or technical subjects - even grammar (parsing) - got harder and more bewildering with each successive year. I was fearful of the future. I had no idea how I was going to earn a living when I left school. How I was going to survive? Life at school during the years from around age ten through fifteen did a demolition job on me, psychologically and emotionally.


At age thirteen I was probably suicidal, though I never actually thought of killing myself or anything like that. Years later I understood that what I had been going through was anxiety and depression. I simply felt miserable and longed to be free of the way I felt. One day in desperation I began to pray. I would get up in the early hours of the still dark Melbourne winter mornings and walk to the Catholic Church at the end of our street in St Kilda. For about a month, in the near empty church lit by a few dim lights, I prayed at the foot of the large statue of the crucifixion of Jesus, I prayed for deliverance from my life. I was desperate - I put all my heart into it. That was in 1956 I was thirteen.


Soon after, I had my first alcoholic drink, a single half glass of fortified wine called Brandivino. The effect was immediate and magical! All the pain I was in disappeared! Emotional and psychological pain lodges in the body. When I had that drink I realised how intense the pain was now that it was gone. That single glass of booze made me feel warm and secure. The future was going to be ok. There was a bar practically on every street corner.


Around the same time one of the nuns in the school I went to, drew me aside and pointed out that I had talent as an artist and that perhaps later I could go on to make a living working in commercial art. My predicament must have been obvious to others and I will be forever grateful to that nun for her intervention. It was a revelation to me – that I had artistic talent! In those days there was no regular art class in the school I attended – she had picked up on my ability from coloured drawings that I had done in exercise books for what was called Social Studies.


I was put into a special art class made up of only five or six students drawn from various grade levels, we attended this special class session once a week. I began to draw and paint at home. Who’s to say if my prayers were answered or not? That one drink lifted away much of the fear of the future; it gave me time. The belief that on leaving school I could make a living from art gave me a sense of security. I was given time to get by. And even if poor grades in technical and mathematical subjects at the next and final school ruled out an apprenticeship in commercial art. Even if I never made much money from painting, it was good for my self-esteem.


From that time on those two things – painting and alcohol - would play major roles in my life, and for a long time alcohol was to get the upper hand. By the time I was sixteen, and working on construction sites, I began to drink on a regular weekend basis. Addiction has its own laws and protocols independent of any other laws - on earth or in heaven, and it takes one where it will - like a cat takes a mouse and plays with it. There is an ancient Persian saying “The man takes a drink, the drink takes a drink, and the drink takes the man.” Advanced alcoholism is an experience almost beyond belief – very scary things begin to happen, especially in those later years.


From around sixteen/seventeen and with friends who had wheels I met guys from different parts of town – the different inner/outer suburban gangs. I had the energy of a seventeen year old, the belief that I was immortal, and the juvenile brains that went with it; and wheels to get around town and leave a trail of destruction in our own lives and that of others. My consciousness in those days was very primitive, and my general education was nil.


I came out of prison a few days after my twenty-first birthday. I had little contact with most of my friends from the old street gang days, and yet I lived right there on one of the streets that we often frequented. I was attending night classes at the School of Art at R.M.I.T. (Royal Melbourne Institute of Technology) four nights a week. I was starting to get to know and become friends with other students; Alison Hill was the first of them. I was also getting to know some of the people around town in the local beat scene (which soon became the counter culture). Art gave me a niche in society in which I could live with some comfort within myself. A sub-culture set apart from mainstream society and the other sub-culture - the criminal, which I was leaving behind. This suited me fine.


I was reading a lot, I was excited by the turn my life had taken and the possibilities presented. I was also seeking some deeper meaning in my life. That kind of reading had begun three years earlier while in prison, when a screw (prison officer) had given me a copy of Dostoyevsky’s The Idiot, this book he said “Will open your eyes”. The effect that book had on me was revelatory, and was a major turning-point in my life. I became aware for the first time of an internal world and perhaps more important - that it had substance and significance. That a giant like Dostoyevsky should write in this way as a matter of course, gave the internal world great meaning for me. I don’t know why but after I read that book I had the feeling that liberation from what I and my life had become was possible – that change was possible.


Early 1965, the same year I started at R.M.I.T. and had moved into the flat in the rooming house in Gertrude St, Fitzroy, another book called ‘The Holy Barbarians’ came into my hands. This book introduced me to Alan Watts' writing, in particular The Way of Zen, and of importance to me was the introduction - the Eastern concept of God. (The following year I read Watts’ Psychotherapy East West). I was also reading Jack Kerouac, Erich Fromm, Freud, and Jung. I had two LP records, one of Kerouac reading with sax backing, and the other Dylan Thomas reading his work, recorded in New York City a month before he died. I had gotten into Dylan Thomas the year before - as a follow-up to my introduction to poetry while in prison via the prison magazine, produced by inmates under the supervision of J.J. Ryan the Director of the educational programs at the prison. Our four page mag, produced in the printer’s workshop, also included pieces from prison magazines in America.


When I got out I found Dylan Thomas in the local library. Thomas seduced me with the rhythms and strong sounds of words and the phantom floating images they evoked.


Around this time besides reading Buddhism I was also reading Christian mysticism – Theresa of Avila et al, and a book called The Imitation of Christ by Thomas à Kempis, a 15th century author. The Thomas à Kempis’ book induced me to go back and re-read the New Testament. I did, and also, among other art work I started doing some black ink drawings of Jesus. Then one morning in late autumn 1966 I simply walked out the front door and onto Lygon St in Carlton, an inner suburb of Melbourne, and with my physical eyes I saw that everything was suffused with a golden light. I saw a golden hued energy flowing through everything, as if in waves moving through all things, that it permeated all life forms.


I had known through my readings in Zen Buddhism and other paths that ‘grace’ comes out of the blue, spontaneously, almost randomly, according to divine will. That is what happened to me. For several days this experience was with me. All my fears and worries were removed. I was given the certainty that God was a living dynamic presence in which all beings and things existed in.


I believe that in that experience I was seeing the manifestation of the Universal Spirit, right there in the midst of everyday life, with the cars and trams roaring along Lygon St, people hurrying to get to work, going about the business of everyday living. For years I never spoke of this experience to anyone. It was not a drug induced experience. At that time I had had only the occasional smoke of hashish. 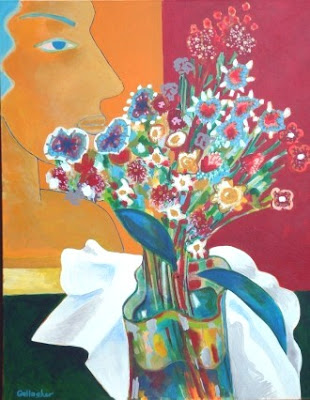 Face With Flowers, 2004 - a painting by Karl Gallagher

nancy in the Bath was always one of my favourites.