It may seem that this Blog is solely about the Beat writers and figures from that generation but it’s not, nor intended to be. It will be about writing, poetry and art. But also about how the life of experience and influences impact on creative individuals.

This is a recently created Blog and my first, so it is early days, too early to make any judgments as to content, and direction perhaps. Still more or less finding my way, technologically too.

It will also be about showing poetry of persons who have had no tragedy at all in their lives. Who may have lived so called normal average lives – held jobs for all or most of their lives, maybe raised a family, or never had any trouble with the law. Of course the wilder lives, the tragedies, the bad decisions, the bad luck or ill fate, the rebirths, the transformations in some lives always grab one’s interest and imagination. One that comes to mind is Samuel Taylor Coleridge so well documented in Richard Holmes’ biography.

There was a lengthy period through the 1980’s when almost the only books I read were biographies – mostly of famous (and not so famous) individuals who had great success and achievement in life and those who seemed to have been plagued by bad luck, or ill fate, in theirs – and often both good fate and ill fate were present in a single individual’s life. As it was in that of Admiral Lord Nelson’s, for instance, and what happened to Lady Emma Hamilton, his defacto wife and their daughter after his death. The British government abandoned them, ignoring Nelson’s written request that their material welfare be provided for should he not survive the coming (decisive) battle of Trafalgar, in a letter written on the eve of the battle, aboard his ship, the battle-ship-of-the-line, and flag ship, 'Victory'.

I was reading particular biographies in a wild hope that they might throw some light on the mess my own life was in. I wasn’t looking for self-development type remedies or potions. I was trying to understand what had happened to me. I found out after dozens of biographies that ill-fate could and did befall even the most successful lives, that nobody was exempt. I got some comfort from that – knowing that in a sense one’s life is not entirely of one’s own making, not solely because of bad decisions, that there was an element beyond our control . . . and that gave me hope, it certainly lifted from me some weight of the guilt and despair I was carrying, enough to keep going. Eventually in January 1991 I was given the answer to my most pressing problem . . . advanced alcoholism. I was fortunate that something within me on that particular day recognized the truth of what I heard – within a couple of weeks I’d had my last drink.

Then the hard work of the early years of recovery began – no game for the faint hearted that is for certain.

Years before I had reached that point - at age twenty-one I found Dylan Thomas at the local library and was hooked on poetry thereafter. Poetry is magic. Very good poetry does something almost mysterious, mystical, in its action – it goes in deep, very deep with some readers, and touches perhaps the soul. 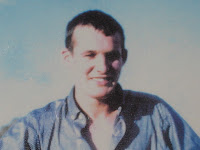 Thus shall you think of this fleeting world -

A star at dawn, a bubble in a stream,

A flash of lightning in a summer cloud,

A flickering lamp, a phantom, and a dream.

I don't believe you EVER looked like that! yeah, life is strange but ya wouldn't be dead for quids!

I don't believe that's you at Bell's Beach! In retrospect everyone's lives are touched by the unseeable. The older one gets the more it sinks in. But ya wouldn't be dead for quids!

yeah well thats true one wouldnt be dead for all the tea in china,
but this shrinkled up wasted away OLD man did look like that . . once upon a time in the Great Dreaming