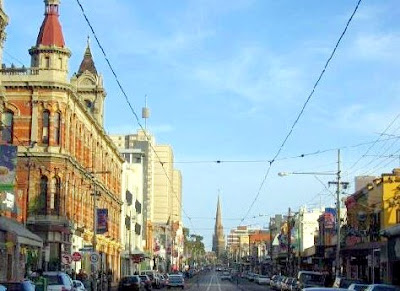 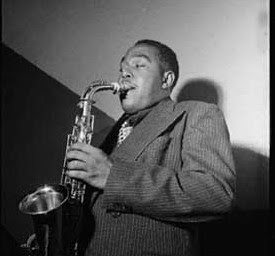 The Way Of Bop

Wears a badge on his saffron robes
It says, ‘Kung Creole’
His message is spreading fast
Through Balinese rock’n’roll
Now he’s opened up a coffee den
Where his Temple hang out
Snitches fall for the Trapdoor’s swing
When the regulars shout
Who-who can stop
The Way of Bop


Now the Warlord’s G-men pounce
Down on teenage losers
Tells the band, keep the entertained
Chanting Blue Suede Sutras
Gets the Joe to the Temple roof
Wait for pedals in motion
Taken off by Koolie’s wings
Clear over the ocean
Who-who can stop
The Way of Bop
Who-who
Who-who 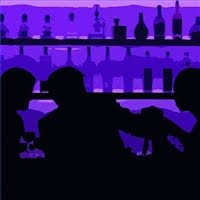 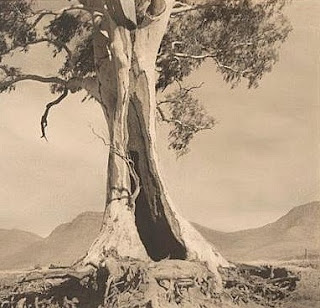 
Once noble
still venerable tree
your innocent arms are dark and dead
giant and brittle
with no sap muscle
in the middle
only your abdomen
bears life
your open slit trunk
bleeds through
the menstrual blue of sky
your tortured limbs threaten
the firmament with twisted fists
but only manage
to scratch and claw
grey arthritic fingers
at empty air
tired tips
of twisted twigs
grate and crack open sores
your hollow trunk
grinds out a baleful warning
of impending doom
creaking and moaning
like the ancient mast
of the Hesperus
soon
you will fall
but leaves still grow
on your shiny side
down low
industrial insects
and hotel-lobby wattle birds
wallow in your green spindly hairs
and still
the mercenary wind
tests your strength
for a time. 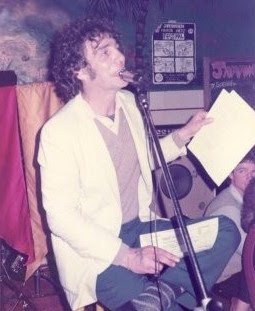 
I watched you,
In the Brunswick Street neon night
Dancing across El Fresco tables
Singing Be-Bop
Balancing in the dark
Like a poetic fool
Then falling onto the pavement
Walking stick and legs akimbo
You damaged your foot
Again
That night
It’s a wonder you didn’t kill yourself!
But fortunately you had
A bird on the hand
And two in the bush


Next morning
We meandered
Down to the licensed grocer
For a hair of the dog
Feeling dirty and seedy
With ashtray mouths
You waltzed along
Walking stick and legs akimbo
“What a beautiful day!
Look at that fucking sky!
You wouldn’t be dead for quids, would ya!”
You proclaimed
Smiling at the weak
Early Melbourne sun
I just sneered at you
“What’s wrong with ya,
David, me old China?
The sun is shining,
The birds are singing,
And we’re both alive and free!
What else could you ask for?”
And we both remembered
For a second
What is was like
Not to be free
And we assumed
We were both still alive
So I gave you ten points
For undying optimism
Persistent positivity
And a cast iron constitution
With a bird on the hand
And two in the bush


If Sonny was Nebuchadnezzar
King of Babylon
You were Belteshazzar
The Revealer of Mysteries
Deciphering the writing on the wall
Daniel
The Interpreter of Dreams
Standing alone
Unscathed
In the company of lions
Shelton Lea
The Larrikin Picaresque Poet
Voice of the lumpen proletariat
The Cant Chronicler of Fitzroy
Grafton, Redfern and beyond
You ripped the writing off the wall
And read it in pubs, clubs, schools and gaols
Now
You are beyond words and time
Your Indigo swift
Transformed into the Phoenix
Soars above
The smouldering ashes of Babylon
No need
Now
For that walking stick and legs akimbo
No need now
For the bird on the hand
Or the two in the bush
Farewell, me ole China 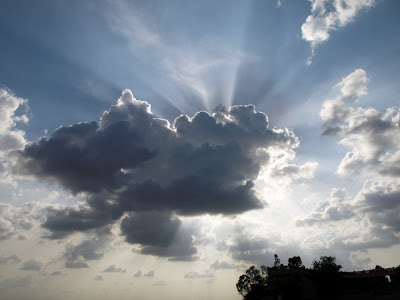 Clouds Over Meherabad, Photo by Geoff Whitlock, 2009
The Speech

two of us on planet blue


with impugnity
is how we imagine
we account for our lives


he's in bed
avoiding the heat
or avoiding
everything


i'm dodging bullets
aimed at my brain
from a .38
held in my own hands 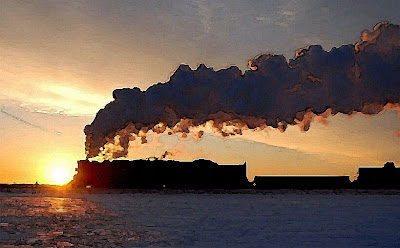 On The Road Again (for Karl Gallagher)


on the road again (whose rep I am) Melbourne to
Shep -- that's over the road again -- Economy
Car B seat 34 window overlooking
long clean highway -- never a driver always the
passenger navigator sidekick affecting
pillion (Easy Rider) -- on the road again
with Kerouac's wry caveat from Big Sur : who'd
believe not hitchhiking but comfortable with
wine in 3rd Class Sleeper coast to coast? -- what happened
to dharma bum? he imagined fans demanding --
Hit the Road Jack dial-tone on two back-packer
German girls' mobile-phone -- as close as I get to


universe poking me in the chest -- "and don't you
come back..." -- Wallan Wandong Kilmore East -- blond shorn stumps
on bleached shaved acres -- unless misled by fancy
a heart could break for less -- abandoned carriages
rust rotting in siding at Seymour for decades --
last home for birds rats & their human counterparts --
broken window in shape of a dark cloud over
the station -- cloud-like shadow across face of
derelict which would spell 'doomed' were a reader of
clouds or shadows on hand to translate -- idiot
joins the train -- requires conductor explain why whole
journey is cheaper than the aggregate of short


trips -- "purchase your ticket or..." -- "are you dismissing
me sir?" -- "let's just say : you'll be walking to the next
town!" -- bails up two adjacent boys -- same questions --
"if it's $8-80 Concession from Melbourne to
Shepperton and it's $6-60 from Broadmeadows --
what is it from Broadmeadows to Melbourne?" -- "dont know"
they say -- dont know either if there's motor-racing
in Burma & Botswana -- but yes their joggers are laced not velchro --
he's head in hands crying "no one wants to talk to
me" -- from out of what stew & heading where? -- on the
road again -- mind hauling the world's inventory
through consciousness's endless contexts -- forever --
train be my confessor -- blue sky grant my pardon 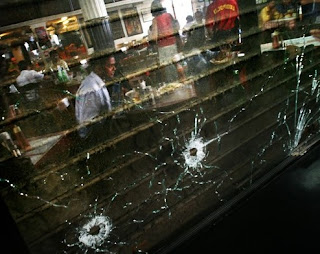 
And we would sit under the Lebanese night
and discuss politics and literature in the darkness.
Shrouded figures sat at tables talking
but not seeing.


Because of him I read Burmese Days and heard of Trotsky
and the perpetual revolution that remained
still born.
Later we would amble over to the Albion and drink our beers
and talk with gangsters, philosophers, pimps and junkies.


In that night when chaos reigned
a girl jumped on stage
inviting all the thieves to a party
somewhere deep in Carlton.


The night was empty of stars
save for the neon popping lights of streets
that left our minds smouldering in the incendiary haze.


We smoked hash
and the night
blurred like a carousel.


Inside the old house we sat around with young men and women,
uniformed police smoked from a hookah,
stoned
immersed in
Cairo nights
and apocalyptic visions still to come.


And my heart pounded
and my head exploded
with the colours of a million covenants
lost somewhere in Carlton.


Brunswick Street blisters in the heat.
Newspapers and dust devils
blow through a Fitzroy afternoon.
The pub doors burst open
with a gust of hot fiery wind
exposing detached boozers
in the dark green glow of VB signs.


The click clack of stiletto heels
rings loudly in the afternoon heat
as she makes the impossible journey
to an improbable storefront brothel.


A steamy brown Asian face
presses against the security grille
pricing carnal pleasures.
"HOW MUCH HALF AND HALF?"
he screeches to the accompaniment
of excited giggles from his sidekicks.


Distaste rises in her throat.
But the Simian devil on her shoulder
seductively suggests sexual services
while the TV blares from the backroom
where Diana and Charles
are making the blunder of their lives.

The Speech and Bullets previously published on Fran's site
http://franyule.spaces.live.com/default.aspx

thanks for inviting me to be on your blog....i can retire now, comfortable in the knowledge that i survived long enough to drag a few more poems out of m'self...love and rainbows Fran Y.

Massage Parlours By Anna Gruenz and Indigo Swift By David Shepherd both have the smell of Fitzroy on em. Good site Karlos.

Deva Boy came by yday as i looked out over wide spaces of empty shop (full mind)and he flicked print-out of the Desolation angels onto the desk! Made my day! Fantastic! And now i've managed to trick my screen into giving up the glorious colour version! Congrats mr editor on great composition of pages and the pics there too, eg clouds over Meherabad and my train chugging along belching smoke...Like Fran says, thank you forinviting...I'll spread the word that this is up! All best, Kris

Memories, such sweet, sweet memories of the people and the streets of Melbourne..Thanks for this opportunity Karlos...