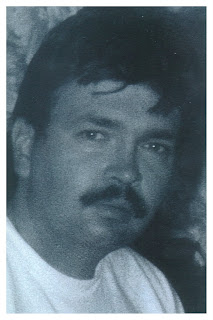 Born in Kansas City and reared in Clinton, Missouri. In Clinton he grew up in the housing projects - the one named ‘Camelot’, also known as the South Project, and in those days was whites only – black American's lived in the North Project. After graduating from high school he joined the Marine Corp. On discharge from the Marines he went on to earn a Master's Degree in Sociology from Central Missouri State University. Presently David Pointer is an unemployed single parent raising two girls. 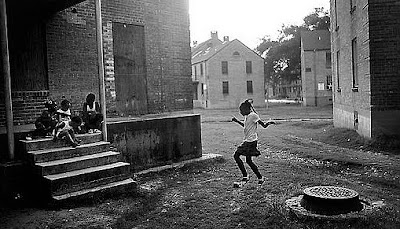 . . . I remember moving into the Camelot federal housing project in 1973. On my first or second day in the project I was attacked in the back yard while taking out the trash. One of the boys advanced with a two by four lump of timber with nails protruding. I picked up a trash can lid and blocked the oncoming blow. I punched the first attacker and he turned and ran away with the other boys. The day after that they all wanted to be my buddy.


To live in Camelot was to live in isolation. I had previously resided in Kansas City, Missouri in a house with my grandmother and mother. Mom had suffered from major depression since the death of my father in 1965, so I spent a lot of time with my grandma, pets, playing sports, Judo and boxing. My father had been a bank robber, gambler, piano player, bowler, ice skater and many other things. Once I remember my mom talking about my father’s death.
She said "When he died I felt a sudden relief that he wouldn't be able to hurt us or embarrass us anymore."


When I moved to Camelot - nobody knew any of these things, and I don't recall ever telling any of the kids about it either. One of the most shocking early events in Camelot was meeting the Elephant woman Mrs. Foster. I was horrified at first meeting. These feelings would pass and I would come to accept her as most people in the project did. Her son Kevin was the kid with the nailed lump of wood when I was new to the housing project.


At the local Punt, Pass and Kick competition the project kids from our project and the one in northern Clinton were turned away. This allowed the socially upper-class boys to compete without the real competition. After the second year of being turned away I held my own competition. We measured our own events. Later when the national competition was held and shown on TV, I had scores good enough to win all three events. The most interesting thing about this was that when I went into the Marine Corps years later I would meet other guys from impoverished backgrounds who experienced the same kind of "turn away" at a "Punt, Pass and Kick" competition. I think this stuff is still little known today. What's better known is the passing over of better players for bigger players in junior high or high school football especially at the quarterback position. [♣ Kerouac -a small quarterback - got this treatment in college football from the coach at Columbia University].


Camelot was pretty well maintained and had crews of people working on things. In the summer they would hire teenage black kids from the North project to help cut the grass and do various jobs in both projects. At that time we only had one elderly black lady living in Camelot south. White people were giving the option sometimes of living in either project. Most blacks wouldn't have had that option at the time. Also, I never knew any white kids in the south project to get any of those summer job opportunities either.


The town of Clinton, Missouri was population 7,504 at the time. The surrounding area was a farming community. Later Truman Dam was put in and has become somewhat of a tourist area. Later, I also became depressed and didn't always attend school every day. At high school graduation time, I searched for jobs in the local community but could locate nothing that payed decent. I had worked my way through high school. The best and last job was two and a half years at the local Dairy Queen. I didn't have connections to get on in the mines or at the phone company. From where I was at, during that time, those were the good jobs and only went to employee’s family members and so forth. So, the only option seemed to be the armed services.


The project was a very controlled area too. There was always someone stepping forward who knew what was best for a poor kid. They had no shortage of people who wanted to serve as proctologist for the poor. For example, if you rode your bicycle around Wetzel Circle there was often a report to management. Wetzel Circle was named after a family of doctors and surgeons in Clinton. At other times, a kid would be threatened with Booneville Boys Home. Wetzel Circle would be a logical choice for a kid wanting to avoid traffic on his/her bike. A number of elderly residents didn't want kids anywhere near their location so the bike riding around sacred Wetzel Circle was a major offence where a single mom would often get threatened with eviction.


Recently I found an old friend Steve from the Camelot days who now lives in Australia. His mother had been married to an American service man that abandoned his family to take up a 15 year military residence in Okinawa. Most of the other kids-are scattered to the winds. I don't know what became of them. The ‘Camelot’ sign was later taken down. The project is no longer called Camelot. 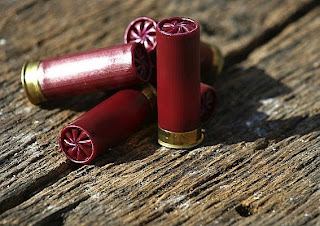 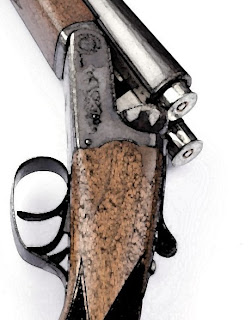 is still out there


emotionally stumbling
through the solitude
of cyberspace

needing another drink
to neutralize the threat
of a dry throat


on a temporary billet
of writer’s block


as the petrochemical
fumes further complicate


the walk over
open carpet


out of position
at the cocktail cabinet


with enough velocity
to lift the elevation turrets
of autopilot


learning center black
is leading you on


Behind every tense bank teller
glides an image of my father
delicate features through Indian
pink perennials, Ironweed and
late-blooming lantana arriving
early at the bank as Carolina
flowers greet account holders,
Christmas fund financiers, and
Mr. James Earl Pointer-custom
pearloid pistol grips reserved
for someone else's Outlaw poem
as life explodes like a dye-
packed sack of diamonds and
somewhere a ghost of a sad
lady sheriff who confronted
John Dillinger and not my dad
watches me escort myself
with emotional amnesty out of
this maximum security mindlessness. 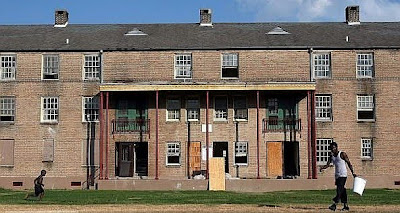 The Lineup Loved
Dedicated to Mrs. Virginia Foster in Memoriam.


Look, I didn't bring you here to remember the
fine glow on my grandmother's Mason jars,
nor do I have any pardon-me dwarf day lilies
to pass out like bottled water after the poem.
The amputated extremities of my well wishers
are wrapped and refrigerated in the mind's
morgue of memory, and so it is with Mrs.
Foster's unexamined crash file, unautopsied
in images so bleak I can't measure the
neurotoxicity in each dreaming night since:


I met the widowed Elephant woman, Mrs.
Foster at 12-B Bradshaw Drive in 1973,
she had swollen purple lollipop fingers
soothing her children's daily lives, had
happy clacker-style clapping hands
when kid's played housing project baseball
with house fire hot singles and homeruns,
with crowdlessness overcome by her
generous encouragement. In 1991, I
learned she had previously adorned
perfect high school attendance (1948-1952).


And that a silver-plated plaque (retroactive)
commemorated this iconic school event.
What had those hallway years been for her?
Perhaps, like a horror movie's hospitality
committee her classmates cometh and down
gauntlets of goodwill she went-four years
club-foot steppingly faster until her diploma
bloomed with delivery. Had she learned to
circumnavigate the nonviolence of smiles
better than the blue heron at Stones River,
lifting, low still over the gladiator waterlillies,
better than the struggling bank robber's son
who would one day shoot for this poem-
who could come down hills from his own
school faster than a Lakota kid riding winter
on a buffalo-rib sled slicing past the first
fists of social class exclusion, lifting
low still over the rocket red larkspur
her luminous smile rouge-cheek-red
honoring the children rowdy over bases, or
royal with the romp-n-chomp summer recess:


Look, Mrs. Foster's inner-spirit was as the
Moon's glow on my mother's favorite music box. 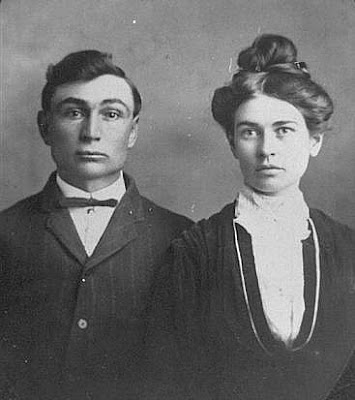 David Pointer is widely published in the American small press and is the author of a number of chapbooks some of which include Wheelchair Dancer (Time Barn Books) and Sign Language (Indian Heritage Publishing). His work has appeared in Blue Collar Review a quarterly journal of poetry and prose published by Partisan Press [ http://www.angelfire.com/va/bcr/ ]
and Labour of Love, and The Beatlick News [ http://beatlick.com/index.html ]

♣ David is editing an anthology on domestic violence. This book will be a fund raiser for local shelters in middle Tennessee and published by Westview, Inc. in Nashville, TN. Submissions can be emailed to David at: dspointer@hotmail.com

Pointer has work forthcoming in the annual chapbook The Lineup: Poems on Crime #3. http://poemsoncrime.blogspot.com/

and in Criminal Class Review #4. http://www.criminalclasspress.com/


Propellant was previously published on http://hemingwaysshotgun.wordpress.com/

powerful piece - somehow evokes the great plains of inland America, and, on second reading the lyrical swing of the language in the poems stares you in the face and you wonder how you missed that the first time around.

'Camelot' indeed . . .an example of the moronical postmodernist contamination of institutional arenas and sociocultural areas in full swing. Ignorant corruption of Meaning and the Concrete reality and its lingua franca.

David is a very powerful writer. His words are bullets from his past. He takes no prisoners. I highly recommend his books and am honored to appear on this site with him.