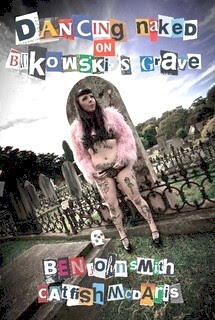 REVIEW OF DANCING NAKED ON BUKOWSKI’S GRAVE
All night I dreamed of the poems of Ben John Smith and Catfish McDaris in their new book Dancing Naked on Bukowski’s Grave.  I read non-stop the Catfish section which comprises the second half of the book, tore through it like the sex-crazed maniac I’ve always been, running down the street after that guilt-ridden fantasy bus headlined real life.  Afterward on the bus, and in my tortured sleep, I began to understand the meaning of the ritual phrase that’s what I’m talking about.  I formed words in my dreams to explain to Catfish how reading his amazing output was like looking into his soul, if anyone has such a thing, because oddly, he approaches soulful material through an outrage of the senses, because he talks about boogers and shit and glorious cunt-holes that most people lack the courage to discuss, yet isn’t that where we all live?  In God’s lap? . . . where Catfish firmly sits while fervently invoking Him in the moving “Calluses”: “I believe in God/I just feel like/kicking his ass/sometimes, when/terrible stuff happens/to the innocent”.
Take for instance “Even Rats Party in Hell’s Kitchen”, a fantastical portrait of the toilet at Dangerfield’s Comedy Club, the cooking up of a poetic recipe that starts out with some possibly true measurements.  1) toilets in NYC and Paris are in “dim decrepit basements, swampy funk-ridden holes”;  2) “the stairway is rancid”;  3) “a cloud of maryjane fumes engulfed me”; 4) “I heard female laughter and an Asian language coming from the Men’s Room”;  the rest could be called imagination straight from God when he introduces “a talking rat” with “a tiny hard-on”.   With these ingredients Catfish leaves the kitchen and enters the inner rooms of the soul, a mystical journey to jolt the jaded and wise-up the weary.
“While Bogart Played with Rock Hudson’s Balls” is another myth-buster.  We knew Rock was gay but what about Bogart?  I always suspected he was a real pussy with his various wives in spite of his tough guy image.  I could imagine Lauren putting him to bed with a glass of warm milk.  Sure, he smoked, but that only began as a way to show what a regular guy he was.  Then he became addicted to sucking butts.  Maybe Rock was the one with the real balls; gay, and enjoying his lifestyle to the hilt.  Like the cops in stanza three.  What’s this tough guy bullshit all about, anyway? Think about it with help from Catfish.                                                                                                            Patricia Hickerson

Two guys in the park were smoking


a blunt, one held on to it, his pal grew


bored, so he unzipped him &

The cops came just as the dude


the cops tapped them both on


the head, then on the mushroom

They started to charge them with


but they let them go, they could


hardly wait to get back to  the 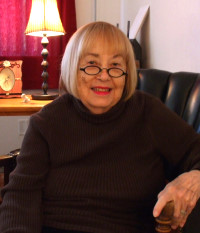 I grew up in NYC/Jersey. I graduated from Barnard College. Came to California in 1956.  I was 28. I’ll talk about my writing . . .  not my career as a Warner Bros. dancer, artists’ model, mother of three, teacher, reporter.  I started with poetry at age 7, much later reading my poetry in San Francisco bars and bookstores. Got a masters in Creative Writing from San Francisco State, and a doctorate in education from USC where my husband was associate professor for 23 years. I became a paid propagandist for the Communist Party; sold pornography to various Penthouse publications such as Forum, Letters, Erotica, Variations.  Then back to poetry; I came to the realization that literary trash, sleaze and the truth carried by these ideas are paintings of the world to come.  These “paintings” have been published in the chapbook Dawn and Dirty and the broadside At Grail Castle Hotel, both from Rattlesnake Press; other poems have been published in Convergence, Medusaskitchen, poetrynow, Presa, Choices, Echoes, Passager, catfishgringoriver, poets for peace, living waters, Rattlesnake Review.
Here’s a couple of sites where Patricia’s work can be found:
http://tenpagespress.wordpress.com/tag/patricia-hickerson/
http://www.rattlesnakepress.com/Patricia_Hickerson.html
♣


Rumour Has It:
Patricia Hickerson is writer and at 83 a survivor and rumour has it that in the old days she knew them all  - Kerouac, Mailer, Pollock, Kline, Billie Holliday, Charley Parker, Brando, Montgomery Clift, Corso, among others. . . in the bars and hipster joints around the Village in NYC.


"My husband was an addicted gambler from the age of 12, son of Communist parents. His father ran for Congress on the CP ticket in 1932. His mother was very beautiful and an intellectual. His parents are featured as Arthur Raymond and Rebecca Valentine in Henry Miller’s Sexus. Miller does a beautiful and fairly accurate job of describing them. My father-in-law had been a boyfriend of Henry’s in Brooklyn.
Because he was a gambling addict as well as a brilliant lecturer, my husband hung out with some very dubious characters in his constant quest for money and we all worked for the mob on a low level during the 70s and 80s, mainly counting the take in porn theatres around Northern California.
I started writing porn, first for small mags like High Society, Pillow Talk; then later through one of my mentors, novelist Mary Bringle who knew an editor at Penthouse Letters Michael Dorsey, I began to get published in Letters, Forum, Erotica, and V.K. McCarty’s Variations (for women). These stories are definitely fictional. At one point I wrote a sex advice column with the nom de plume Juanita Bottom. There had been several Juanitas before me; even the letters are made up. The pay was phenomenal."
♣
Catfish McDaris recently won a Flash Fiction contest at Buns & Barbs judged by the 2009 poet laureate, Jonathan Penton from Unlikely Stories; he has an interview with Charles Plymell; and a video with Belinda Subraman on Outsider Writer; he has work on/in The, and Black Listed magazines.
He has been published in New York Quarterly, Louisiana Quarterly, George Mason Quarterly, Main Street Rag, Pearl, Bukowski Review, Chiron Review, Haight Ashbury Review, Sho, xib,  Lobster Cult, Thirteen Myna Birds, Beggars & Cheeseburgers, Sex & Murder, Gutter Eloquence, Naughty Girlx, Unlikely Stories. and many more.
He won the Uprising Award in 1998. He has won the Poetry Slam twice at the Green Mill in Chicago, birthplace of the poetry slam. His last poetry reading was at the Shakespeare & Co. Bookstore in Paris.
♣

The piece on Patricia Hickerson was an unusual slice of life of a person I didn't know. The connection to Henry Miller's Sexus was fascinating. Richard Krech

yeh, life - its a strange and wonderful thing what with all the connections, mis-connections, and criss-crossings of ships in the night, some close by, some distant, on the same seas and same storms and same port's of reprieve.