[This is a little late. I've been away for a month and after being back for a month I'm only just catching up. karl] 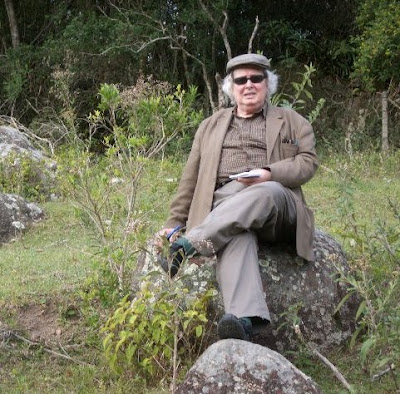 Hugh Fox, East Lansing Born February 12, 1932 in Chicago, Illinois died on Sunday, September 4, 2011 at the age of 79. Hugh was Professor Emeritus at Michigan State University having taught in the department of American Thought and Language. He was a poet and writer having over 200 novels published.
(Lansing State Journal on September 6, 2011)
=
Hugh Bernard Fox Jr. (February 12, 1932 – September 4, 2011) was a writer, novelist, poet and anthropologist and one of the founders (with Ralph Ellison, Anaïs Nin, Paul Bowles, Joyce Carol Oates, Buckminster Fuller and others) of the Pushcart Prize for literature. He has been published in numerous literary magazines and was the first writer to publish a critical study of Charles Bukowski.
Fox was born and raised in Chicago as a devout Catholic, but converted to Judaism in later life. He received a Ph.D. in American Literature from the University of Illinois at Urbana-Champaign, and was a professor at Michigan State University in the Department of American Thought and Language from 1968 until his retirement in 1999. Hugh Fox died on September 4, 2011 in East Lansing, MI.
Fox was the author of over sixty-two books, including six books on anthropology. He wrote over fifty-four books on poetry and many volumes on short fiction, and published many novels. Fox also wrote a number of books on pre-Columbian American cultures and catastrophism. Some of these works were labeled in the pseudoarchaeological category, such as his book Gods of the Cataclysm: A Revolutionary Investigation of Man and his Gods Before and After the Great Cataclysm (1976). Some of his books with these themes have been compared to the work of Ignatius Donnelly.
His book Gods of the Cataclysm received a number of positive reviews. Editor Curt Johnson praised the book claiming “Hugh Fox’s Gods of the Cataclysm...ought to be required reading for cultural historians of all disciplines.”[
The Ibbetson Street Press of Somerville, Massachusetts published Way, Way Off the Road: The Memoirs of an Invisible Man by Hugh Fox with an introduction by Doug Holder in 2006. This book recounts Fox's life and the people he knew from his extensive associations with the "Small Press" marketplace over the years, including Charles Bukowski, A.D. Winans, Sam Cornish, Len Fulton, and numerous other people.
Fox's novel e Lord Said Unto Satan was published in the spring of 2011 by Post Mortem Press (Cincinnati). His final novel was Reunion, published by Luminis Books in summer 2011.
(From Wikipedia)
=


Writing these poems
becomes self-flagellation,
at the same time peoples
the vacuum with sparks of
his presence, please, God,
give him back to me for
just a handful of years
and I will give you a witness,
like Peter, Paul, Augustine,
Aquinas, Luther, Loyola, Wesley,
give him to me and I will give him
back to you shining with yourself,
not for me but for HIM,
to unfold the folded in the light of
Your being, so he can become what for all
eternity (in the madness of your pans)
he always was...and let me in my own
last years, move at last from JOB to
REVELATION.