reading at Shakespeare's 1966, photo by Harold Adler
Richard Krech
was born in 1946 and grew up in Berkeley. He still lives in Califonia. The sixties were an exciting time to be around and engaged with creative activities. In 1966 he started a poetry magazine, Avalanche, and sponsored open poetry readings on Telegraph Avenue in Berkeley. 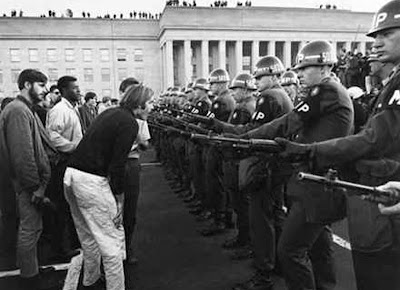 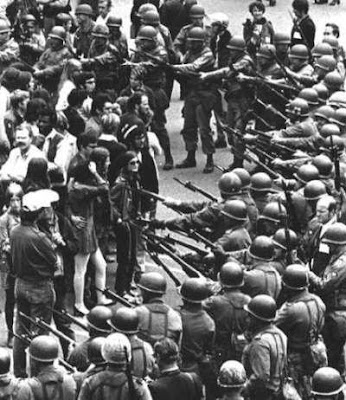 After several years of involvement in direct action in an increasingly more violent situation, it was time to take a break. In 1971 Krech travelled overland across North Africa, the Middle East and Southeast Asia.


He gradually stopped writing in the early 70s. In 1976 he enrolled in law school and on graduation in 1980 practiced criminal defense in Oakland. In recent years, due to a degenerative spinal condition he no longer engages in the physically demanding work of criminal trials and now concentrates on appellant work. Along the way he was drawn to Buddhism and over time this has deepened. His energies began to focus on service to others, via law as a defense attorney. Decades later, in 2001 he began to write and publish again. Krech has many books published, and appears in a bundle of anthologies.


THE Winston BROOKS is Out

taking His Mind for a walk

even the time in the motel


even the time in the motel
when we tried to wake the sleeper
from his Overdose, the blank walls
bare of color excepting a poor print hung
upside-down,

no furniture, just a path
around the bed, & coke bottles & dead cigarette butts,
hot, stuffy, the windows closed on this summer day
to keep the wind
from blowing the curtains open
Exposing
the scene,
even that drab bleak room
has a richness
about it contained
on the heads
of those that are there. ‘surely
there is a beautiful place what
are we looking out of?
The tapestry
Need Not Be Before Your Eyes!
to have seen it once
is enough
to always hold it closer to you
than if
it fell from your very hands.
A Blank Room
is filled with all the delicacies and delights which
have been
part of the life of those that stare at the (seemingly
blank walls. 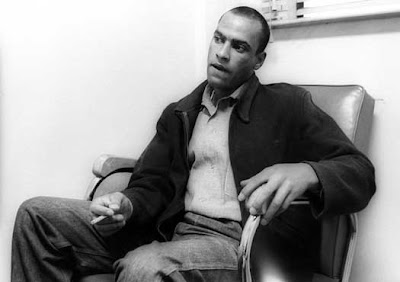 
There is no danger,
really.


Revolution to the fullest!
Black Power
shows me no threat.


I find the spades on the corner,
the hippies in the street,
both getting the same shit
from the heat.


We both realize the common enemy
our common fight.


Black people, the first
people to reject
assimilation into
the great plastic
universe.


America,
you created a culture so sick
your ex-slaves
couldn’t dig it.


The children
of your great ‘middle class’
are leaving in droves.


Your cities are burning.


I call for
the destruction
of law & order.


And the beginning
of the time
of man.

past time & space.
the acquisition
of a ticket
enables you to travel
more than

geo graphically.
walking along a path
the sand colored walls
of Fez on the right.
the turrets, the mosque
crying in the distance.

a gauche-the caravan
entering behind some walls.


the timelessness.
the people moving steadily
along. growing smaller
in the distance. larger
as they approach.


the old man in Marrakech
in the café. pointed yellow shoes
& jalava. asked me if I like to smoke.
I said yes. we smoked kif
from a sebsi.
He said: "je ne fume trop.
seulement cent pipes par jour."


we could see the mosque
from the café, against the night sky.
the inch long bugs
crawling the blue walls
in back of the table.


returned to the hotel
to watch the tile walls. 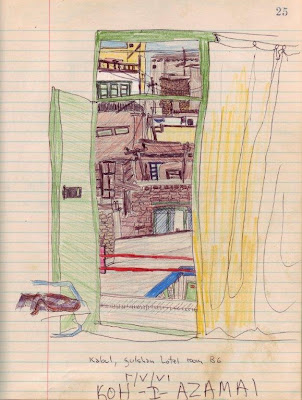 
He came up towards me
to exchange greetings.


His back arched, pinched jacket
turban, the flowing white tail
blowing in the Afghani wind.


His long delicate nose
& green eyes burning
with the wisdom & mystery of the East.


We shook hands, touching
our hands to our chest
afterwards.


I walking towards the Citadel of Herat
the wind carrying much dust with it
in this most ancient of Asian cities. 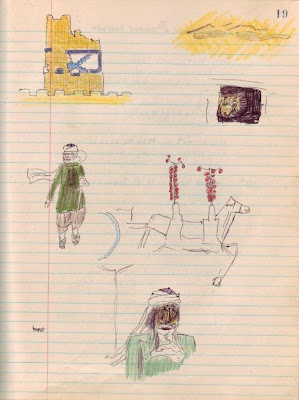 travel notebook sketch by richard krech
= = = = = = = = = = = = = = = = = = = = = = = = = = = =
the return to writing
The Gudgeon Fishermen
The gudgeon fishermen
send faxes from Lagos
offering partnerships in Bank
of Nigeria fraud schemes,
or befriend confused elderly
gentlemen sitting on mall benches
in the California twilight.
One practitioner
had crayons the same green
as his nice car
with a dent in the fender.
In a parking lot
he would mark the front corner
of the elderly pigeon’s empty car
w/ the green crayon,
and confront them
upon their return.
Threatening to call the police
and have their license confiscated
because they were too old
and confused to drive;
unless monetary payment
for the “damage” they had done
to the fisherman’s car
was immediately forthcoming.
II
He repaired the next day
to the gudgeon’s house (as noted
on the check received in payment)
to “return” part of the money
because the repairs cost less
than had been anticipated.
While there
his children entered the bedroom
and took money and jewelry.
The gudgeon fishermen
rarely engage in physical violence.
Their victims
often too confused or ashamed
to report the crimes.
The gudgeon fishermen
have no shame.
Their confusion
is colossal.
9/16/03
=

Premeditated Deliberated & Intentional
After three days the jury came back
with its verdict: guilty of murder
w/ special circumstances.
A month later
we sit here again,
waiting for the penalty phase verdict.
The jury not only deliberating
my client’s fate this time,
but their own as well:
will they too be guilty of murder?
Premeditated murder this time.

Not the rash impulsive act of a teenager
but the sober calculated decision
of 12 adults:
a teacher, a fireman, a nurse...
Not my client’s peers
by any stretch of the imagination.


The prosecutor having removed all blacks
from the jury
over my objection
and w/ the court’s blessing.


Will they cast the second stone?


Evolution of landscape
on a daily basis. [There is no reference
to “Intelligent Design” in this poem.]
Former ranch lands fenced off,
roads created, plots...
Hundreds of homes, a school, minimal
infrastructure.


In the City, disappearance
of a corner building creates
a momentary new awareness
of the intersecting streets
- a different horizon
soon to be replaced with a new
slab architecture larger structure.


Changing bit by bit,
day by day, like you see the young face
of an old friend or family member
in a way people meeting them anew
cannot.


Dan told me about riding his horse
down Fruitvale Avenue
at the end of World War One.


I recall the structures
of my childhood. The empty lot next door
and brick ruins from the great fire
of 1923.


I remember Allen coming over
one day in 1967 saying
“handcrafted is more pleasing to the eye.”


And we move on
simultaneously having greater and fewer
options than before.

Stepping through
a changing landscape


Our path lies ahead.


I saw bearded uniformed men
praying
at the appropriate times of day,
brewing tea,
coming and going
the rest.


A calmer time.
Fewer bandits
and those confined
to the rural areas.


A weak King in Kabul,
traditions and tribal ties
going back beyond memory
keeping order.


The horse
has way left the barn
on this one.


I use your cane now,
humbled by the vicissitudes
of injury and age.


I see the small brass plaque
with your name on it
and a date: DEC 1959


No one alive today
remembers the occasion.


Was it a Christmas gift?


Commemorative of your undertaking
5-mile Sunday walks
up Euclid Avenue
and along Grizzly Peak?


I was big, I was fast...
I could climb up the drain spout
to the roof of the Kindergarten Building
and smoke cigarettes, the ends
staining my fingers a cool orange color,
the grey smoke rising slowly forever
into the Summer afternoon
of youth.


This is not
a love song.
Like a second
skin,
a pair of pajamas
worn under my Levis,


the structure grows
within me,


Abusing me
in various
ways.


I know you cannot kill me.


The only problem
is that you may make
life so miserable
I kill myself.


Try to take
each moment
as a jewel worth holding

in my hand
at sunset


light from a thousand fires
bursting from its center,


refracted thru angles
into the brilliance
of emptiness.

I hope this can sustain me.


I want to ride the Grand Trunk Line

I am not content to read my old books


and go quietly into the garden


to escape the world.


I need my refuge.


But as a place to come out of,


of mischief and grandeur


to bring understanding to the world.

reading at the Art House 2009, photo by Al Young 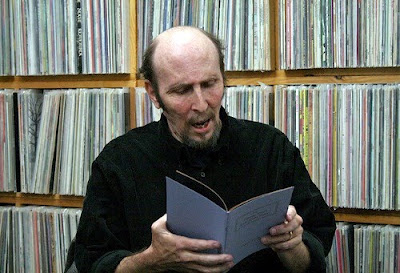 Some sites on Richard Krech with links to more: 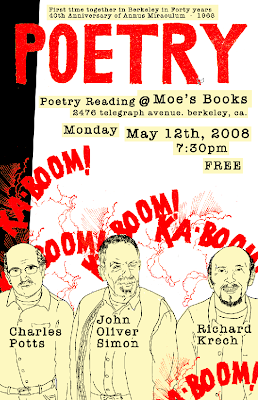 Rimbaud, was in Paris when the Commune was put down. He was later heard to say "BURN EVERYTHING". Yay...
Not enough burning in the late 60s
AmeriKa. they should have BURNED THE ENTIRE JOINT DOWN. What a Shitpile we have inherited. You have squibed it fitzroy dreamer, you could have done better...you could have shown us pictures of the cites the blacks burned. Huey Newton was executed, not murdered, by a twobit shit dealer whose strings were pulled by puppet masters. posted by Freddie Fandangle.

Thanks for this page about Richard Krech. Beautiful illustrations from the travel notebook !
And thanks for the link and comment on Interzone news !

i like the pics you have lots of them