Love By Any Name 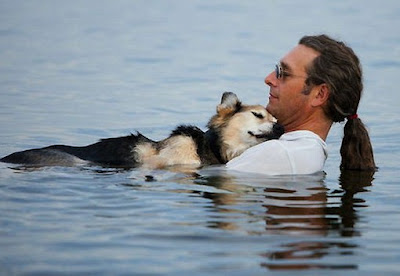 John Unger, the man who is pictured lulling his 19-year-old arthritic dog, who is racked with pain, to sleep in the water to ease the animal's suffering has revealed he is only repaying the favour after his faithful companion rescued him from despair.Mr Unger, who is now 49, initially adopted Schoep 19 years ago with an ex-fiance. But after the relationship ended he fell into depression and told the Duluth News Tribune that one night he went to a breakwater off Milwaukee, where he contemplated suicide. "To be honest with you, I don’t think I’d be here if I didn’t have Schoep with me (that night)," he said. "He just snapped me out of it. I don’t know how to explain it. He just snapped me out of it. … I just want to do whatever I can for this dog because he basically saved my ass. I’m just repaying a favour."

The pair have been inseparable since Schep was a pup, but Mr Unger was recently informed the dog had developed arthritis, which led to the now-famous picture, taken by his photographer friend Hannah Stonehouse Hudson. “Schoep falls asleep every night when he is carried into the lake,” Ms Hudson told Mailonline. "The buoyancy of the water soothes his arthritic bones. Lake Superior is very warm right now, so the temp of the water is perfect."

Schoep's veterinarian, Erik Haukaas, told Mailonline: "John is a great guy but he doesn't have a whole lot of money. He does the best can to care for the dog but he's failing he's slowing down. Most dogs don't live near this long."