Water-colour on paper by Bob Dylan. 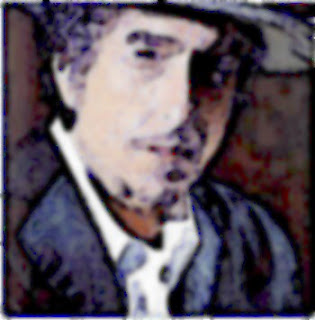 'Self Portrait With One Eye Closed On A Winters Day'

31st July 2012
“Dylan has been challenged about his use of material being plagiarist. His album Modern Times included lines lifted from blues songs and from the Civil War poet Henry Timrod. And recent exhibitions of his paintings turned out to contain images from other sources.”

About a year ago Dylan had this to say, relevant to the above and other aspects related to the current era named by the intelligentsia from the academy, the arts, letters and literature as ‘Post Modernist’:

“Well you know they used the term ‘modern’ early last century and now they call the theory of what’s happening in the world of ideas ‘post-modern’ among others. You know – no absolutes, no absolute reality, no absolute first cause, no absolute rule of behaviour and so on, so why shouldn’t I borrow whenever I feel like it? If you want to put a label on what I do then give it the label of ‘plastic post modern’, that’s as good as any. I mean plastic in the sense of flexibility and movement and not in the sense of phoney, you know, like a plastic fork instead of a real iron fork. Plastic, flexible, able to adapt to form or environment that’s what I mean. That’s what I do, just like the Romans took ideas and things from the Greeks before them and which the Greeks got from Sanskrit Aryan India before them, which they got from an earlier culture, and earlier period – everybody borrows, if it works then use it, you know.
Now I’ll tell you something I ain’t told nobody before and I got it direct from the thoroughbed's mouth so to speak – one day I was sitting with Woody Guthrie in the hospital when he was dying and we were alone and he told me that his whole style of story, song, and sound he got face to face from an old guy in the Appalachian mountains, a hillbilly you could call him, by name of Ezekiel McDougals, and that was back in the 1920s when Woody was really no more than a kid. McDougals was a very old man back then and Woody said that there was always a bunch of musicians in McDougals house, everyone from all over wanted to play music with him – jam with him – because he knew so much and the history of it. Now back then this old man told Woody of how he personally had known a travelling Negro musician by name of ‘One Eye Willie’ who was a legend – but almost nobody had ever come across him – and McDougals told Woody that he got most of what he knew as a musician from One Eye Willie back in the 1870’s. Now One Eye Willie he told to McDougals that he got most of what he knew from an old Scottish ex-slave from the plantations when One Eye himself was no more than a kid.
Now that’s something you probably never knew - that thousands of Highlanders from Scotland were sold as slaves after they were hunted down for years by the Duke of Cumberland, brother of King George II of England, after the battle and massacre of Culloden in 1745.
Them clansmen, the Highlanders, was shipped off across the Atlantic in chains and sold as slaves to work alongside the Africans in the plantations of the South. So I can trace my protocols of artistic lineage all the way back in a direct line over 250 years, and back in those days the current theory and label that the intelligentsia – so called -  named that period of time and the term used was ‘The Enlightenment’. And while we're about identifying antecedents here's a late one - the Chicago Blues sound of Paul Buterfield Blues Band of 1965, that resonated with me big, my kind of sound, I could see myself putting dust bowl ballads to that kind of sound.  So they can shove their accusations, their rules and regulations, their labels and matrixes, their parameters and terms of reference, all the way up their styro-foam assholes. And anyway, what's your lineage? ”

In an interview with ‘ Black Ear Abraham’ at the Sleazy Easy, a blues dive in the Cajun quarter of New Orleans, 2011.

Some abstract water colour paintings by Dylan from 2006. 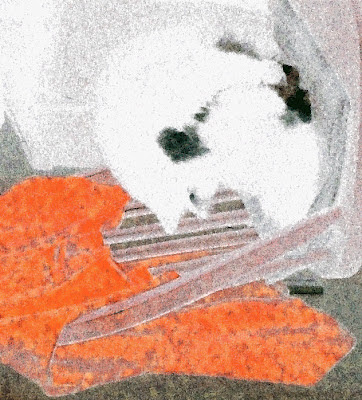 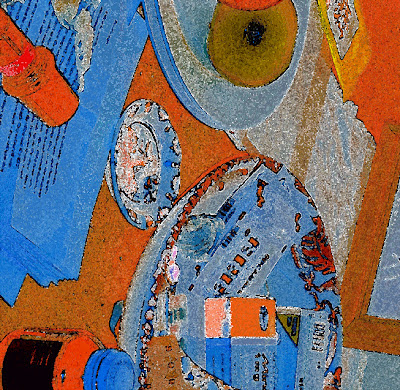 Oh, you got me pinned down good there man, but you aint got it all you know. Bob