A Review by Catfish McDaris

Horror Sleaze Trash
by Ben John Smith
Horror Sleaze Trash is beautifully done 110 page hardcover book of poems by Ben John Smith. Simply put it is a loaded bazooka that fits nicely in your hands and fires round after round, guaranteed to knock down anything that moves. Ben is from Melbourne Australia, so his writing gives an insight into his country. He works construction, drinks with his mates, is true to his woman, and likes Elvis Presley. Ben runs one of the top “anything goes” on line literary and art zones at horrorsleazetrash.com. The poems in Horror Sleaze Trash, his second hard bound collection are each a bit different examining life under a poetic microscope and exposing it in many brilliant ways. In “Chump” the poem has a poet explaining to his woman (as all poets must do at some time with their loved ones) why most of his non-writing work mates won’t buy his books, but will blow loads of cash on drink and horse races. At the end of this poem he ends up sitting in the rain with a kangaroo with a broken leg until the cops show up to shoot it. Sadness made its debut in this poem, but there are plenty of happy ones and head shakers also. Words of too much drink, old men described perfectly, vaginas, sweaty dicks, folks going to church, Henry Miller, a black fella with lice, a dude that shits like a drainpipe in a thunderstorm. Ben John Smith writes as all educated men do or as Gary Snyder said “deeducated” which is uncivilized and barbaric. He’s well read and influences of Bukowski, the Beatniks, Travis Bickle, Joseph Conrad, and Galatians from the Bible appear, but Ben’s got an original voice and shows no fear. In “Foreskin” he compares a bulldog on ice cream to sticking his dick in a beer bottle. Included are three poems titled “Shaving My Balls Pt.1, 2, 3” and they end in a query to askjeeves.com about what to do about itching testicles. Australian English is a bit different from American English, which is refreshing and makes this book that much better. The slick cover by (ths) is the nicely shaped rear view of a near nude lady before a wall of graffiti. There’s a cool photo of Ben at end of the book standing in front of the Liberated X Bookshop and ladies, he’s easy on the eyes. I wholeheartedly recommend buying this book, you won’t be sorry.
◈◈ 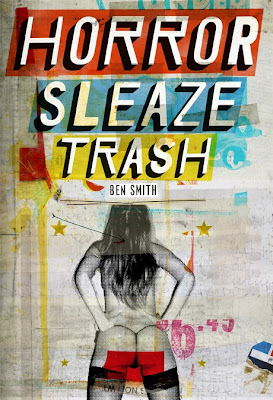 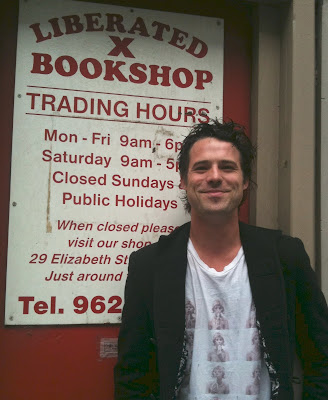